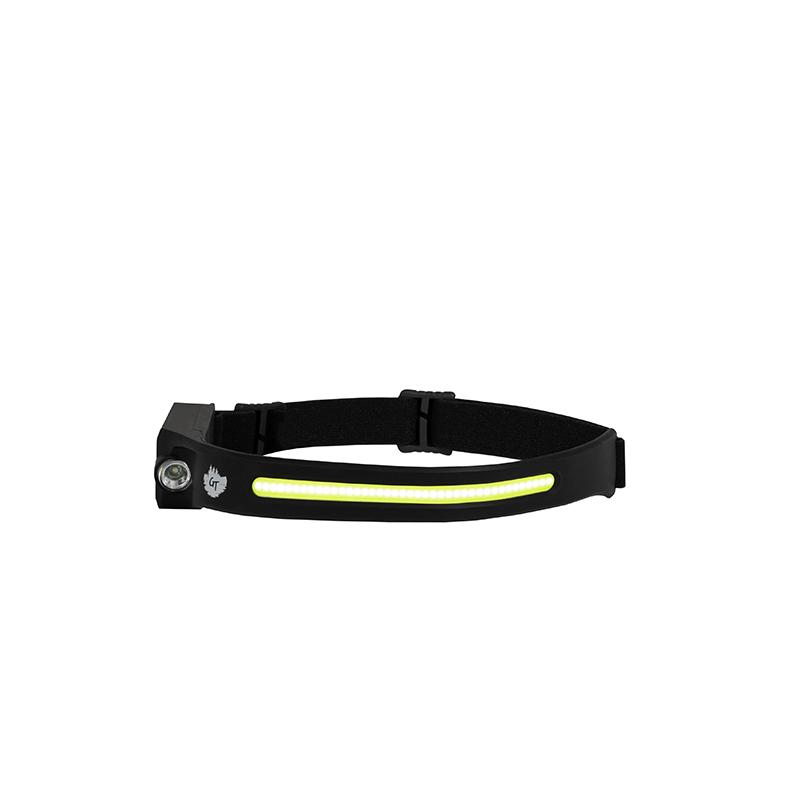 USB-C rechargeable LED headlamp, wide beam, light, compact. As much for fishing, toolbox, hunting, crafts or for your outdoor activities.

Whether you work in a dark, restricted place or are going to walk your dog, this headlamp is ideal! With wide-beam lighting, it can illuminate what’s in front of you 230 degrees. So, unlike a traditional restricted beam lamp, you won’t have to point your head in the direction of a specific point. Very popular with mechanics, craft enthusiasts and hikers, it adapts to all your needs.

It has a power of 350 lumens thanks to its multiple LEDs concentrated in the head ring. And its 200-lumen side projector gives you long-distance illumination. Rechargeable via USB-C port, its 1200 mAh battery fully charged in just 2.5 hours. With a duration of up to 8 hours, in low resolution mode, it can allow you to maintain good visibility for an extended period of time.

It has 5 different lighting modes: COB high, low COB, high XPE, low XPE and strobe mode. You can select any mode with the switch.

COB (chips on board) LED light offers a higher brightness rate and a more uniform appearance than traditional LEDs.  The dispersion of the light beam of the COB LED is second to none and eliminates the variations in beam intensity produced by multi-chip bulbs; the spaces between the chips creating shadow in the lighting beam. In addition, COB technology offers more reliability and a longer lifespan than other LED technologies.

Different, XP-E LEDs achieve higher lumen per watt coefficients allowing more lumen and increased efficiency, less energy. Designed for a wide range of high-lumen applications, whether for indoor or outdoor use, in portable devices or as a substitute for conventional lamps, the XP-E is an LED with up to 88% more light output than equivalent high-power LEDs.

The headlamp also works in motion detection mode. The side headlight is equipped with smart sensors, which allows you to control its ignition with a movement of the hand.

Its extendable and adjustable headband is comfortable. Its ultra-light weight makes it an essential accessory. You will forget that you are wearing it! Compact, it is easy to carry anywhere. You can even leave some in different key places, such as the fishing chest, tool box, glove chest of the car, your craft storage, with the dog’s leash, etc. She will become your ally in any circumstance!

There are no reviews yet.